Home Anti - Aging What is Skin Cancer? – Its Type and Various Other Factors 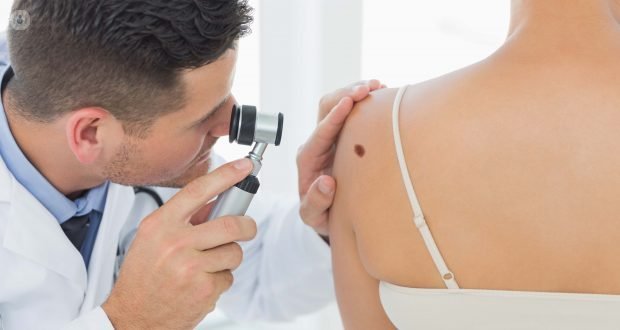 Skin Cancer is the abnormal growth of skin cells, which is most commonly due to increased exposure to the sun. It originates from the cells of the epidermis, the superficial layer of the skin, but does not spread to other body parts, except a few types of skin cancer. Many factors contribute to skin cancer, the prime factor being exposure to ultraviolet rays either from the sun or from tanning beds. This problem is worse in areas of high elevation, due to lesser layers of atmosphere protecting them or those near the equator, as the sunlight exposure is more intense there.

Skin cancers are curable if diagnosed and removed at the earliest. If it is not, cancer can spread to other body and the disease can become fatal.

Skin cancer has many causes such as exposure to ionizing radiations (X-rays) or chemicals predispose to cancer like arsenic, having a condition that weakens your immune system such as HIV/AIDS and with risks such as having precancerous skin lesions, a family history of skin cancer, and a personal account of sunburns and so on. Aside from this, most skin cancers arise from DNA mutations that happen due to increased exposure to ultraviolet light.

Skin cancer affects people of all skin tones and colours, especially those with darker complexions. When melanoma occurs in dark skin tone people, it’s also likely to occur in areas which are not exposed to the sun, such as the palms of the hands and soles of the feet. Many of these early cancers are controlled by one’s immune system, which when compromised, may give rise to the development of masses of malignant cells that begin to grow into tumours. There are many types of skin cancer, some less dangerous than the others but equally essential to diagnose and treat.

There are three types of skin cancer —

Basal cell carcinoma may appear as:

There are many treatments available for this type of skin cancer. Surgical methods include Electrodesiccation and curettage (ED&C) which removes smaller or superficial basal cell carcinomas; Surgical Excision, used for more extensive lesions; Freezing or Cryosurgery, used for sporadic cancers; Mohs surgery, for injuries that are large, deep and fast-growing. Other methods include various medications.

Squamous Cell Carcinoma occurs in sun-exposed body parts, such as your face, ears, and hands. The people with darker skin are more likely to develop squamous cell carcinoma. They develop on those areas that aren’t often exposed to the sun. Skin cancer is more common in immunosuppressed people. In most instances, its biologic behavior is much like basal cell carcinoma with a small but significant chance of distant spread.

Squamous cell carcinoma may appear as:

Treatments for this type of skin cancer is the same as that of Basal Cell Carcinoma with a few additions like Radiation therapy, Lymph node dissection, systemic chemotherapy, immunotherapy and so on.

Melanoma can develop anywhere on the body. It can also develop in healthy skin or in an existing mole that has become cancerous. Melanoma Cancer usually appears on the face or the trunk of affected men. In women, this cancer develops on the lower part of the legs. In men and women, melanoma occurs on unexposed skin to the sun.

Treatments for Melanoma skin cancer are the same as that of other types of skin cancer but also include Wide Excision, Targeted therapy and in grave cases, amputation.

Other common types of skin cancer are:

This form of skin cancer develops in the blood vessel of and it causes red or purple patches on the skin which is known as mucous membranes.

Merkel cell carcinoma causes firm and shiny nodules that occur on or just beneath the skin.

This rare and aggressive cancer originates in the oil glands in the skin.

You can minimize your skin cancer risk by decreasing your exposure to ultraviolet (UV) radiation. Keeping a constant check on your skin for suspicious changes can help you detect skin cancer at its earliest stages. The early detection of skin cancer gives you a true picture of successful skin cancer treatment.

Are you looking for a skin cancer specialist? Get online cancer consultation, now.

How to Write a Personal Statement for Your Medical School Application

Facts To Know About Online Courses For Psychologists

How The Dental Sector Adapted To COVID-19

Sexual Wellness: Here is everything you need to about male enhancement pills & supplements

How to Write a Personal Statement for Your Medical School Application

Facts To Know About Online Courses For Psychologists

Sexual Wellness: Here is everything you need to about male enhancement pills & supplements

Everything You Need To Know About Frozen Shoulder